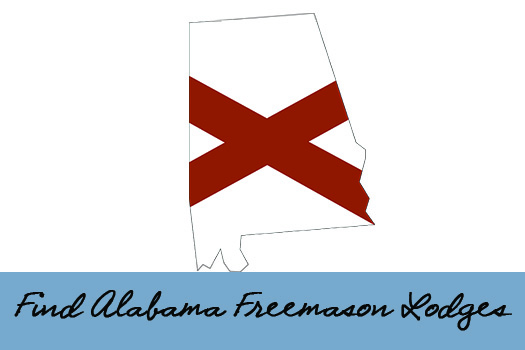 How can I find Alabama Freemason lodges? – Find a Masonic Lodge Near You

How can I find Alabama Freemason lodges?  – Find a Lodge Near You today! Did you know that you and your family are welcomed to visit any Lodge within the State of Alabama? It’s true – many Lodges host Family Nights, Open Lodge Meetings, Presentation and Award Events, and Social Gatherings in what Masons in Alabama call their ‘Grand Lodge‘. Simply use the link below to contact a Lodge nearest you. Sometimes, towns are so close that one lodge actually covers both. While for rural communities – there maybe a county wide lodge in some cases.

Here’s how to find Alabama Freemason Lodges Near You!

The Worshipful Master and Officers of the Lodge will be happy to give you a tour of their Lodge. While touring the lodge building ask questions and learn more about how Freemasons helped improve your local community. The Lodge Officers are capable of explaining What is Freemasonry and how becoming a member can be a benefit to you and your family.  Many times, the Lodge Officers will go into detail about the history of Freemasonry and their particular Lodge.  Lastly, remember to invite your family members to ask questions and get the answers they are looking for.  Alabama Freemasons pride themselves on being open and honest to directly address any of your questions or concerns. Here is the link to the lodge locator for the Grand Lodge Of Alabama.

Enjoy learning about the Mission, Objectives, Goals, and the Rich History of the Grand Lodge Of Alabama on how it was established…

The mission of the Grand Lodge of Alabama is to provide a strong and viable leadership to the Masons of Alabama. To develop and implement programs to assist the lodges in becoming more visible and active in the communities and to promote Friendship, Morality and Brotherly Love throughout the state. To facilitate the charitable outreach of the Grand Lodge of Alabama. To promote Honor, Integrity and Truth to all men.

The objectives of the Grand Lodge of Alabama are as follows:

Goals to meet the Objectives

Learn about the rich history of Freemasonry in Alabama

The original charter was granted to Madison Lodge No. 21 of Huntsville by the Grand Lodge of Kentucky on August 28, 1812. “This Lodge … still exists as Helion No. 1,” according to Masonry in Alabama by masonic scholars.

It is said that inside the lodge is the flag of Alabama, flanked by the flags of Kentucky and Tennessee, representing Helion’s origins in these states. Also, it is important to note, if you ever wish to visit this blue lodge that the original 1811 Bible is still upon the altar. It is important recognize that original brethren of Madison Lodge No. 21, who began the practice of Masonry on Sept. 6, 1811. Among these brothers were the leading political, agricultural, and commercial, leaders of not only Huntsville, but of Alabama, Mississippi, and Tennessee.

In 1811, the steamboat named “New Orleans”, which was the first steamboat to land at a Louisville wharf, thus beginning the birth of that city as a great center of commerce and culture. In August of this same year the Kentucky brothers established Freemasonry in Huntsville, Mississippi Territory, by granting a dispensation
to the brothers of Madison Lodge No. 21, Grand Lodge of Kentucky, receiving its charter in Aug., 1812.

These brothers would be among the leaders of this city as a center of commerce and culture. The brothers of Madison, Alabama/Bethesda, and Helion lodges are found among the prominent leaders of government, trade and commerce, medicine, education, and the arts throughout the history of Huntsville and Madison County, as well as Alabama, Mississippi, and Tennessee.

Trade and business brothers included operative masons, Thomas and William Brandon (natural and Masonic brothers of Madison Lodge), Historian
Judge T. J. Taylor refers to them as, “the builders of the city, had come here (from Franklin, Tenn.) in 1810 with no property except their trowels and great
skill in their trade, and from a straggling wooding village they made a city of stone and brick.”

Establishing the Grand Lodge of Alabama

Thus, as the great Tennessee River unites the Commonwealth of Kentucky with the states of Alabama and Tennessee, so also is Helion Lodge a symbol of Masonic brotherhood among these great states. Brother Founding Fathers of Huntsville, and the Establishment of the Lodge Hall Tradition holds that the founding fathers of Huntsville, John Hunt and Leroy Pope were brother Masons.

Colonel Pope’s grand mansion, “Poplar Grove”, one of the earliest brick structures in Alabama, was built in 1814. In 1823, he sold a lot fronting this grand estate (sale price of one dollar) that “the three Masonic Bodies now constituted and subsisting in Huntsville, Eunomia Chapter V, Madison Lodge I, and Bethesda Lodge II or such… regularly constituted Masonic Body or Bodies… to… cause to be erected and finished Building and Improvements….”

Thus began the first Lodge building, Eunomia Hall (Eunomia: Greek Goddess of law and legislation). On Nov. 22, 1823, the brothers of Madison, (Bethesda), and “a number of visiting brethren from neighbor lodges… forming procession in order to lay the Corner stone of Eunomia Hall…” The first floor served as the school of Mrs. Jane Childs (1848- 1853), a meeting place for the Baptist Society, and as the synagogue for the congregation B’nai Shalom from 1876 to 1898. Five congregation members were Helion Brothers. This building remained until 1920, and was attached to the north wall of the present 1917 temple.

During the War Between the States or the American Civil War, the blue lodge was divided with some brothers leaning towards the Union while other were for the Confederacy.  Therefore, history denotes that some of Brothers from the original blue lodge in Alabama served the forces of the Confederacy, while other Brothers
were prominent Unionist leaders. During the 1862, the city of Huntsville was occupied by Union forces at the beginning of April. This continued to be the case until the end of the civil war. Sadly, there was alot of death and destruction throughout the Tennessee Valley and unfortunately many of Tennessee Valley Lodges were destroyed. Thankfully, the Helion’s Eunomia Hall (it’s first lodge building) escaped destruction and preserved this landmark of the history of the Grand Lodge of Alabama.

Who are the top leaders in the Masonic Grand Lodge of Alabama?

Learn what cities and townships have blue lodges in Alabama so you can find Alabama Freemason Lodges!

The cities and townships with blue lodges of the Grand Lodge of Alabama are as follows: Huntsville in Madison County; Monroeville in Monroe County; Tuscaloosa in Tuscaloosa County; Moulton in Lawrence County;
Grove Hill in Clarke County; Mount Olive in Jefferson County; Butler in Choctaw County; Montgomery in Montgomery County; Florence in Lauderdale County; Athens in Limestone County;  Linden in Marengo County; Camden in Wilcox County; Decatur in Morgan County; Tuscumbia in Colbert County; Courtland in Lawrence County;  and Wetumpka in Elmore County.