Why do Freemasons wear white aprons?

Freemasons wear a white apron to represent themselves as Mason in a stated communication at Blue Lodge.  The color white comes from the lamb skin material in which it was made from.  Entered Apprentices, Fellowcraft, and Master Masons wear their aprons in a different way to signify their rank in the fraternity. A Master Mason can be buried wearing their apron at his death as well.

What is the history of the white apron?

Originally, the apron was worn by Operative Masons to protect themselves from rough stones and tools. As the fraternity evolved into a more speculative society where men free born and of lawful age could join the Freemasons. The Masonic Apron essentially was kept to remember the workmen of our origins. These days the ‘white leather apron’ is a badge of fraternal brotherhood and reminder of the lessons in the 3 degrees of Freemasonry. It should serve as a reminder to Master Masons that regularly sit in lodge or not of their obligations (or commitments they had promised) to uphold the values and brotherly love within the Craft. 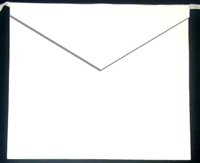 The Masonic Lambskin Apron to most brothers within the fraternity. But, a good debate can be had for the Gavel and other meaningful symbols found in Freemasonry. But I must say, this is a more publicly known and seen symbol of the fraternity versus what is discussed in the degrees.  So it is a fun debate to listen if it is the greatest symbol of Masonic tradition and history.

When the fraternity started to establish Grand Lodges, the founding brothers of these Grand Lodges adopted the working tools and traditions of the operative stonemasons. According to Masonic research, the original aprons worn by operative masons were made of leather and large enough to cover the wearer from chest to ankles. But, the speculative brethren of that era were not engaged in stone-masonry but other industries. Some brothers were printers, clergy, royalty, merchants, and so on.

Therefore, they kept the traditional items of a operative masonic lodge and the importance of how to identify a traveling mason between building projects. Among them was the protective apron, which operative masons wore as they worked and traveled to find new work. When a traveling operative Mason would come to a lodge in a new town – his apron was his way of first showing his skill level and what he kind masonry he specialized to the other Masons in the town.  So, yes the Masonic Lambskin Apron has a rich history of first being more of an utilitarian leather apron in it’s earliest days of usage.  Now, the brothers keep the apron and include what it symbolizes to them today.

What symbols can be found on a Masonic Apron?

As stated earlier, over the course of time, the Masonic apron has evolved. From the original utilitarian garment of a operative stonemason to the current day speculative Masonic symbolic garment used today.  The officer positions of a blue lodge can be found on the aprons as well as the symbol of a Master Mason on others. The Master Mason symbol is generally worn by brothers that are not yet Past Masters but have been raised to the Sublime Degree of Master Mason and are not currently serving the craft as an officer.

Okay before I continue, it is so important to mention that the explanation coming up is from my experiences of Freemasonry based in the Southern United States of America. I know that Freemasonry is an international brotherhood of men and that there are so many Grand Lodges with minor differences when it comes to aprons that this explanation may vary based on the reader’s Masonic Grand Lodge jurisdiction.  So if your Masonic Apron style is so radically different – feel free to share that with me at the Freemasonry Report’s official Facebook Page anytime you want.  I love hearing from my readers and hearing about your Grand Lodge’s rich history.

Now let’s talk about the look of a Master Mason Apron: 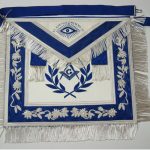 At the time of the formation of the Grand Lodge of England, the Master Mason’s apron was white. Why did they want the color of a Master Mason Apron to be white only?  Due to the preservation of its symbolic character, the apron should always be pure white and clean without an stains on it. A clean white apron is of course agreed upon by most all Freemason as being an emblem of innocence and purity in the Masonic movement. But your Grand Lodge’s first three degrees would only truly give you a full explanation of the aprons meaning.

A Master Mason apron should always be made out of lambskin, yet that is not always the case. I have seen linen, satin, plastic leather and other substitutions for lambskin in my Masonic travels over the last number of years. 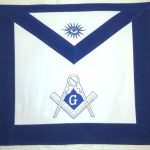 Being a Freemason based in Florida, my experience has been that online you can find various qualities of aprons to purchase. But, if you are not certain what your Grand Lodge allows in reference to other materials – just call them and ask. Some Grand Lodges are strict and do not allow any other material to worn, such as linen, silk, satin, or etc.  Why? There is a debate that it could be harm the emblematic character of the apron.

On some Master Mason aprons you will find a blue fringe. This blue fringe generally surrounds the white leather center, is a constant reminder of the universality of Freemasonry. It is to remain Freemasons of the unbroken bond of friendship and Brotherly Love which exists in the fraternity. But again, you should review the documents of your Grand Lodge to determine if that meaning is actually true in your jurisdiction.  Many Freemason authors have penned some amazing poems, myths, stories, and presentations for our enjoyment. But, unfortunately numerous merchants online have taken this as fact, which at times is not always the case. 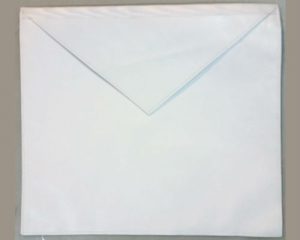 When does a Freemason earn his Lambskin Apron?

During his first degree, each Mason is given a plain white leather apron, it represents the white lambskin, a symbol of innocence.  A Freemason’s labor of building his life in a good upright way starts early in his Masonic career and continues until his death.

Thus, a new Entered Apprentice receives a white apron upon being made a Mason in the Lodge. This apron helps to remind the brothers of the fraternity that we as being good men are expected to pursue always becoming better in that brother’s life as a Freemason. This apron is always to be cherished by the brother and a honor to have ownership of for his entire life.

I will be writing more articles to help grow the fraternity and I hope this information was helpful to you. If you want more Freemasonry topics to read? Good news, I am creating plenty for you to enjoy! I have been spending hours creating this information, so take a moment to read each one!  Or maybe you want to find a lodge in your neck of the woods? Good news – I am creating a complete review of each Grand Lodge – it will take time but I wanted you to have this information at your fingertips!  If you want to network with other Freemasons – check out our Facebook Group / Page now!