What is a Shriner and is he a Freemason?

First off, yes a Shriner is a Freemason. A Shriner is a Freemason that helps the community. A Shriner does this by getting involved in a club or unit which the Shrine. From being part of the clown unit which helps in the Shrine Circus or a local Parade to motorcycle groups, horse patrols, marching bands, veteran clubs, photographers, Past Masters, classic-car owners, and the list goes on. A Shriner intention is to very social while giving back to the community . By getting involved in a unit that appeals to their interests or hobbies, a Shriner will be excited to help with big events that help the community.

Is the Shrine an appendant body of Freemasonry?

Yes, the Shrine is an independent appendant body part of the Masonic organization. The Shrine offers ceremonials for it’s candidates versus the traditional degrees offered by the Masonic Blue Lodge. The local organization is called a Shrine Temple. All Shriners must be Master Masons in good standing within a Blue Lodge in the Grand Lodge where the Shrine Temple is located. No Master Mason can be a Shriner if fails to pay his Blue Lodge Dues annually or if he suspended from the fraternity for any reason by on that Grand Lodge’s Masonic Law.

Why is the Shrine called the “Playground of Freemasonry”?

Many brothers in the fraternity call the Shrine – the “playground of Freemasonry.” Here is why they that. The Shrine does not make Masons. All the hardwork of making Masons via the three degrees is done in the Blue Lodge.  Further, all the higher degrees of the Scottish Rite and York Rite are done in those appendant bodies. Lastly, the AMD handles other ancient degrees which the Shrine does not confer either.  A Shriner goes his initiation via the Hot or Cold Sands. But before a man can become a Shriner, he must be raised to the Sublime Degree of Master Mason. No Entered Apprentice or Fellowcraft can become a Shriner.

Let’s continue looking at the Shriner’s being the playground of Freemasonry. First, the Shrine Temple has a full bar available for it’s membership. Many Grand Lodges forbid the sale or consummation of alcohol in a Blue Lodge especially within the lodge room. Thus, when in the Shrine, a brother can enjoy drinking anywhere and anytime within the property of the Shrine Temple.  In the Shrine Temple, the membership hosts parties and social evenings for brothers and their wives to hang out. From Halloween Parties to playing bingo, the possibilities are endless.

Since, they do not make Masons – the Shrine is more focused on fundraising activities. They host fundraising events to support both themselves, special community initiatives, and their hospitals. Again, for many years the most recognized fundraiser has been Shrine Circus. But here in Florida, our local Shrine hosts an amazing Charity Auction which raises a lot of money for their preferred causes.  These events were designed to be a hospital fundraiser and many Shrine Temples send 100 percent of the proceeds to Shriner’s Hospitals.

But the Shriners are also active in community Parades and Motorcycle Poker Runs too.  Each Shrine Temple has developed it’s own rich traditions of annual fun events to do in the community.  Parades have become part of the Shriners ethos, why? Because anybody in the community can march in a parade, and Shriners pride themselves on their marching bands, driving mini cars, dressing up as clowns, creating cool looking parade floats, walking their camel in the parade, and rumbling down the street in with their motorcycle unit.

What is the History of the Shrine?

As we have learned, the Shriners is, at its most basic level, a sub fraternal organization of the Freemasons. Now the full name — Ancient Arabic Order of the Nobles of the Mystic Shrine — you can rearrange the letters A.A.O.N.M.S. and spell “A MASON.”

In the beginning, it all started in Manhattan in 1870 when some members of what’s considered the world’s oldest fraternity – Masonry – were hanging out at their favorite tavern. They felt that Masonry, which traces its roots to stonemasons and craftsmen of the Middle Ages, was way too focused on the ritual. These guys wanted a fraternity that stressed fun and fellowship.

The Masons who gathered at this table were noted for their good humor and wit. They often discussed the idea of a new fraternity for Masons, in which fun and fellowship would be stressed more than ritual.

Who were the founders of the Shrine? Walter Fleming & William Florence

Dr. Walter M. Fleming, and William J. Florence, where regular attendees of the tavern and the conversation to start a more social focused appendant body of Freemasonry. Both men took the idea seriously enough to do something about it. Billy Florence was a well known actor. After becoming the toast of the New York stage, he toured London, Europe and Middle Eastern countries, always playing to capacity audiences.

While on tour in Marseilles, France, Florence was invited to a party given by an Arabian diplomat. The entertainment was something in the nature of an elaborately staged musical comedy. At its conclusion, the guests became members of a secret society.  Florence, recalling the conversations at the Knickerbocker Cottage, realized that this might well be the vehicle for the new fraternity. He made copious notes and drawings at that initial viewing and on two other occasions when he attended the ceremony, once in Algiers and again in Cairo. When he returned to New York in 1870 and showed his material to Dr. Fleming, Fleming agreed. Two of those gentlemen – Walter M Fleming, M.D., and Billy Florence, an actor – took that idea and ran with it.

Dr. Walter Millard Fleming was a prominent physician and surgeon. Born in 1838, he obtained a degree in medicine in Albany, N.Y., in 1862. During the Civil War, he was a surgeon with the 13th New York Infantry Brigade of the National Guard. He then practiced medicine in Rochester, New York, until 1868, when he moved to New York City and quickly became a leading practitioner.  Fleming was devoted to the fraternal ideology. He became a Mason in Rochester and took some of his Scottish Rite work there, then completed his degrees in New York City. He was coroneted a 33° Scottish Rite Mason on September 19, 1872.

Fleming took the ideas supplied by Florence and converted them into what would become the Ancient Arabic Order of the Nobles of the Mystic Shrine (A.A.O.N.M.S.). While there is some question about the origin of the Fraternity’s name, it is probably more than coincidence that its initials, rearranged, spell out the words “A MASON.”

With the help of other Knickerbocker Cottage regulars, Fleming and Florence:

The initiation rites, or ceremonials, were drafted by Fleming with the help of three Brother Masons: Charles T. McClenachan, lawyer and expert on Masonic Ritual; William Sleigh Paterson, printer, linguist and ritualist; and Albert L. Rawson, prominent scholar and Mason who provided much of the Arabic background.  .

What is the official emblem of the Shrine?

The Crescent was adopted as the Jewel of the Order. A Freemason can use any materials to form the Crescent. But, the most desirable would be the claws of a Royal Bengal Tiger that is united at their base in a gold setting. In the center is the head of a sphinx, and on the back are a pyramid, an urn and a star.

The Jewel bears the motto “Robur et Furor,” which means “Strength and Fury.” The modern day Shrine emblem includes a scimitar from which the crescent hangs, and a five-pointed star beneath the head of the sphinx.

What is official salutation of a Shriner?

The founders of the Shrine created a salutation which is still used today. A Shrine Masons says to another Shrine Mason: “Es Selamu Aleikum!” which means, “Peace be with you!”

After this statement, the other Shrine Mason is required to return a response salutation: the gracious wish is “Aleikum Es Selamu,” which means “With you be peace.”

The red fez with a black tassel is the official headgear of a Shriner. It derives its name from the place where it was first manufactured in the holy city of Fez, Morocco. It said that it is been handed down through the ages. and some historians claim it dates back to about A.D. 980. Yet the name of the fez (or tarboosh) does not appear in Arabic literature until around the 14th century. One of the earliest references to the headgear is in “Arabian Nights.” So the academic debate will continue of the origin of the Fez in the Morocco.

When was the first Shrine Temple Established?

On September 26, 1872, in the New York City Masonic Hall, the first Shrine Temple in the United States was organized. The first temple, Mecca Shriners, met in New York City in 1872.   Brother McClenachan and Dr. Fleming had completed the ritual and proposed that the first Temple be named Mecca. The original 13 Masons of the Knickerbocker Cottage lunch group were named Charter Members of Mecca Temple.

Noble Florence read a letter outlining the “history” of the Order and giving advice on the conduct of meetings. The officers elected were Walter M. Fleming, Potentate; Charles T. McClenachan, Chief Rabban; John A. Moore, Assistant Rabban; Edward Eddy, High Priest and Prophet; George W. Millar, Oriental Guide; James S. Chappel, Treasurer; William S. Paterson, Recorder; and Oswald M. d’Aubigne, Captain of the Guard.  Many of these Masons made it a point to lunch at the Knickerbocker Cottage, a restaurant at 426 Sixth Avenue at a special table on the second floor.

What is the Imperial Council in the Shrine?

At a meeting of Mecca Temple on June 6, 1876, in the New York Masonic Temple, a new governing body was established and it was called “The Imperial Grand Council of the Ancient Arabic Order of the Nobles of the Mystic Shrine for the United States of America.”

Brother Fleming became the first Imperial Grand Potentate, and the new body established rules for membership and the formation of new Temples. The initiation ritual was embellished, as was the mythology about the fraternity. By 1878, within two years, there were 425 Shrine Masons in 13 Temples. Five of these Temples were in New York, two were in Ohio and the others were in Vermont, Pennsylvania, Connecticut, Iowa, Michigan and Massachusetts. The Shrine continued to grow during the 1880s. By the time of the 1888 Annual Session (convention) in Toronto, there were 7,210 members in 48 Temples located throughout the United States and one in Canada. By the year 1898, there were 50,000 Shrine Masons, and 79 Total Temples chartered under the Imperial Council.

Are the Shrine Temples Really Dedicated to Fun and Philanthropy? 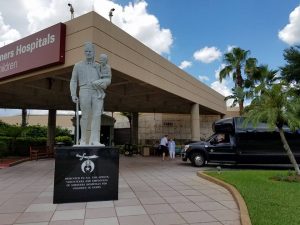 If you enjoyed this blog article keep reading more about Freemasonry’s other appendent bodies now.