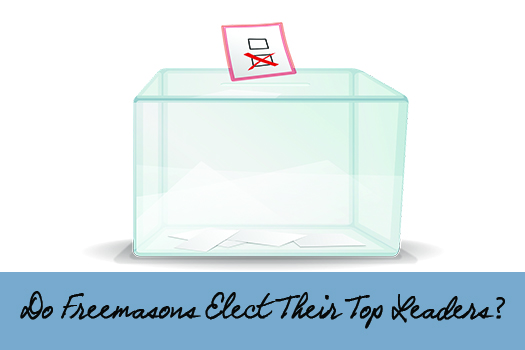 Do Freemasons elect their top leadership?

Yes, every year Masonic Lodges do have elections. These elections are to vote on new top lodge officers in the blue lodge. Any blue lodge that does not hold annual election of officers is considered irregular by most Grand Lodges. These elections happen in the end of the year to elect the following years leadership team.

What Officers are elected in a Blue Lodge?

(An Article by The Freemason Report – Freemasons Elect Their Top Leadership)

The top five officers elected in the Blue Lodge are as follows: Worshipful Master, Senior Warden, Junior Warden, Treasurer, and Secretary. These elected officers are voted on and approved by a majority of the brothers present in the regularly stated meeting of the blue lodge. The election happens only once a year unless a position is vacant. If a vacancy were to happen, a special election will be called and approved by the Grand Lodge to fill the open seat. In some Grand Lodges, if there is an open position during the annual election – the current brethren that are officers maybe required to stay in their respective positions for an extra year. But, this judgement solely rests with the Grand Master only.

What Officers are not elected in a Blue Lodge?

The officers in the blue lodge which are appointed and approved by the Worshipful Master are as follows: Tyler, Chaplain, Musician, Senior Deacon, Junior Deacon, Senior Steward, Junior Stewart, Historian, and the Marshall. These appointments are not elected but maybe brothers that are Past Masters of the lodge in some cases. Yet, at other times in maybe new brothers in the lodge that wish to serve the fraternity. The top leader of the lodge is the Worshipful Master and even though he may listen to wise advice from the brothers, it is his sole appointment prerogative. In some Grand Lodges, the Wardens may select for appointment their deacons, but these must still be approved by the Worshipful Master.

Who can not be appointed or elected an Officer in the Blue Lodge?

Some Master Masons can not be appointed or elected to an officer role in a blue lodge. This is mainly due to the brother being on an ‘npd’ status. NPD stands for Non Payment of Dues. If this brother is considered ‘npd’ – the lodge will first have to vote on the brother after a background check has been preformed. In some grand lodge jurisdictions, it is required that a brother has passed basic Masonic Leadership or Brother Based exams to qualify for an elected officer-ship.  While other Grand Lodge’s require a brother be capable of ‘giving back’ all the work prior to being allowed to seat in the East. Many Grand Lodge’s recommend that a brother be active in the degrees for candidates and new brothers prior to being elected into the East.

Who else can not be appointed or elected into a officer role in a regular blue lodge?  Well, the top reason for a brother not being allowed to serve the fraternity is if he has been brought up on Masonic Charges. If this were to happen, that brother could be elected for an office in the blue lodge until after the Masonic Charges have removed. If a guilty verdict is delivered back to the brother, he will be suspended or removed from the fraternity entirely.  Furthermore, if any criminal felony charges / verdict upon a brother, it would disqualify him from being elected, appointed, and quite possibly attending any lodge meetings as well. Lastly, no Entered Apprentice or Fellowcraft Mason can be elected to hold a position in a blue lodge.

The blue lodge is now into the final few weeks of the Worshipful Master’s year. Furthermore, we have lodge officer elections coming up annually.

As always, I am excited for all those running for elected offices for the upcoming year. I hope each elected brother does his role to the very best of his abilities so our lodge can benefit from his labors. So, are you ready for brutal honesty now?

Let me put it this way…  “Hey we are having dinner tonight,” I mention to my daughter. She asks me “what are we having?” Here is my answer…

Brutally Honest Answer – “We are having dead bird that most likely was murdered with hundreds of his or her friends and family in a small building in some rural area. On the side, we are having fresh green plant that someone ripped out of the ground after being sprayed with numerous hazardous chemicals to speed up its growth cycle. But don’t worry we washed the plant leafs.”

So a lodge election kind of feels the same way to me.  There is a softer and more idealistic side to it where everyone is cool and chill with the election. Yet, I have seen in my time, volunteer elections were emotions run high and the more brutal honesty is pushed into the world.

Did you know, I spoke with the Grand Secretary of My Grand Lodge recently about Freemasonry? During the phone call, he asked me about the election process for the upcoming year. My answer was “Well either way, someone will win and someone will lose. Someone will leave the lodge meeting unhappy based on the election results.”  He response was “That should never be the case.”

You know what… he was right. After thinking about his comment for several days, I even located the answer to his statement, which can be found in the opening and closing charges of any Florida blue lodge.

Maybe at the upcoming election, we should all stop to seriously reflect on the words of these charges and take those sage words to heart. Maybe then win or lose, we all can walk out of the meeting with peace and harmony in our hearts.

Did you want more Freemasonry 101 topics to read? Good news, I am creating plenty for you to enjoy! I have been spending hours on creating this information, so take a moment to read each one!  Or maybe you want to find a lodge in your neck of the woods? Good news – I am creating a complete review of each Grand Lodge – it will take time but I wanted you to have this information at your finger tips!  If you want to network with other Freemasons – check out our Facebook Group / Page now!